Just had such a fun audition, where I got to talk, interact, be me, and just PLAY!

It was the most fun I’ve had in ages!

Sometimes, we creatives understandably take our work so seriously because it’s how we make our living, but we’ve gotta remember what made us seek a creative life in the first place – that is to have fun, create, share our gifts and revel in the gifts of others.

When work time is play time, everyone wins – the people who are creating, and the viewers you’re creating the content for.

It just seemed right while feeling all childlike to pick up my favorite childhood treat of a 711 Slurpee.

Indulging in a favorite treat from your childhood is a super sweet way to tap into that inner child, who can help you create most authentically.

“Welcome to hair heaven!”
Sounds like my kinda place!
That’s what I heard as soon as I stepped into the Mandalay Bay Ballroom to host the red carpet for the 26th annual North American Hairstyling Awards in Las Vegas. 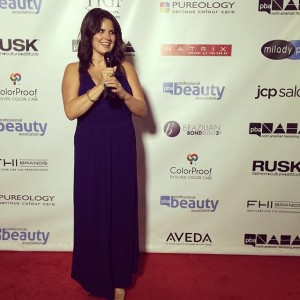 And, hair heaven it was.

It was a dream come true to be asked by NAHA to be the official host of their red carpet pre-show, but it was a true INSPIRATION to meet all of the talented nominees and visionaries.

Brad Goreski shined when he hosted inside, but I had the chance to catch up with him before on the red carpet.

The evening’s host, Brad Goreski and me on the carpet.

It was also good to catch up with my buddy – and hair royalty – Eden Sassoon.

And, I loved getting to meet Miss America herself, Kira Kazantsev – what a beauty inside and out! There were 3000 attendees this year, but the real spotlight was on the nominees and winners. 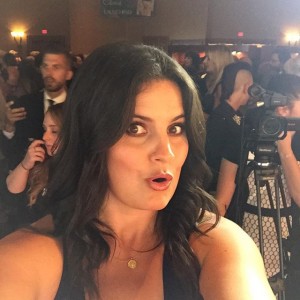 The paparazzi on fleek. Yep. I just said on fleek.

This was the first year that there was a Nails category, and I had so much fun – and a little envy – checking out the talons on all of the nominees. Here I am with nominee, @Princess_Paige1. 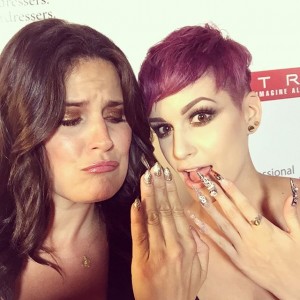 A little nail envy: I thought I had long, beautiful nails until I saw the Nail nominees on the red carpet.

And here they are…THE WINNERS OF THE 26TH ANNUAL NORTH AMERICAN HAIRSTYLING AWARDS!! 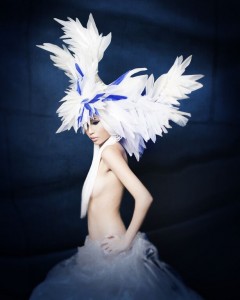 EDITORIAL STYLIST OF THE YEAR: Lisa Yamasaki of J’s Hair Studio and Academy 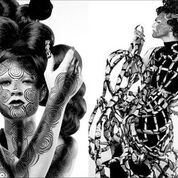 HAIRSTYLIST OF THE YEAR: Robert Grimes of RLG Salon

MASTER HAIRSTYLIST OF THE YEAR: Vivienne Mackinder of HairDesignerTV MEN’S HAIRSTYLIST OF THE YEAR: Paul Pereira of Mathew Guido 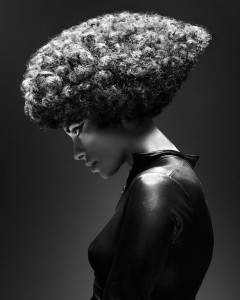 And there was pleeeeeenty of celebrating at the BangStyle after party! 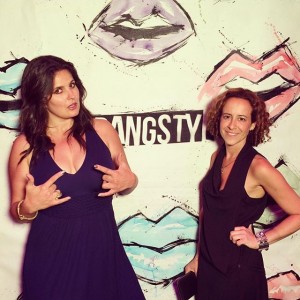 Trying to be street cool – and obviously, not succeeding at it. At least the party was a blast! Widning down an epic night in Vegas

My heartfelt congratulations to all of you winners – and nominees! I can’t wait to get back to  hair heaven next year!!

Join the party! The Hickory Farms Twitter party tomorrow, that is.

Y’all. This bountiful basket just arrived on my doorstep from Hickory Farms and I simply cannot wait to share it with my Easter guests this weekend!

Spring in a basket! Literally! You can win it (minus the wine)

It’s called theHickory Farms Bountiful Tastings basket ($100 value) and I am giving away a slew of them tomorrow Tues, 3/31 at 10am PST/12pm CST / 1 pm EST when I host another fun #TraditionTalk #twitterparty with Hickory Farms – (Editor’s note: wine pictured is not part of the gift).

Just follow me @Beautyfrosting & @HickoryFarms on twitter and use the hashtag #TraditionTalk to RSVP to be entered.

You are cordially invited to… Come join me for a very special MaxLove trunk show at Wood and Vine, on Wednesday, March 11th at 8 pm. Come enjoy the photo booth, get creative at the Brave Bead Bar, and more! Come get creative at the bead bar!

Proceeds go to The MaxLove Project, which helps children fighting pediatric cancer and other life-threatening diseases, and their families, thrive.
*Fun (philanthropic) fact? The founder of the organization, Audra Wilford, was recently one of 4,000 women nominated for L’Oreal’s Women of Worth Award, and she was a top ten finalist! Below are some links:
Hope you can make it to make lives for these kiddos just a bit sweeter! Look forward to seeing you there.
xoxo,
Dawn

I am thrilled and honored to be a Featured ISSE Beauty Influencer this weekend at ISSE in Long Beach!

What is ISSE? Good question. It’s the International Salon And Spa Expo.

The 13-year-old me is over the moon that I get to nominate my picks for best new product, best established product, and best of show in hair, nail and skin from all of you exhibitors across the show floor.

I cannot wait to meet all of you guys from salons, spas and beauty brands and try out your latest and greatest!

Here are all the details:

Blogger Café: For the first time at ISSE Long Beach 2015, the show floor will feature a one-on-one Blogger Cafe giving top beauty influencers from across the U.S. the opportunity to meet with show exhibitors. ISSE Long Beach attendees will also have the chance to meet with these beauty influencers, including yours truly, throughout the show and can win a VIP gift bag! Each beauty influencer will nominate the best new product, best established product, and best of show in hair, nail and skin from exhibitors across the show floor. Each exhibiting company has 7 chances to win! The “Best of Show” will be announced by celebrity hairstylist, Ted Gibson, at the ISSE Long Beach Night Out Party! Sunday, January 25 at Sevilla Nightclub.

Job Fair: PBA is proud to host the first annual Southern California Beauty Career Fair at ISSE Long Beach 2015. Show attendees and beauty professionals can speak one-on-one with representatives from beauty companies and salons/spas about available job opportunities on Monday, January 26, from 1:00p.m. – 3:00p.m. in the Long Beach Convention Center. The career fair is open to the public but qualified attendees must purchase a ticket to access the show floor.

Did someone say Beauty Bar?

xoxo,
BF
BF Asks: Will you be at ISSE? Tell me more, tell me more!

Hey guys and dolls! There’s not much I enjoy more than hosting and getting to “expert” it up on tv and at events. As such, here’s my updated hosting reel.
Hope you enjoy it as much as I’ve had compiling it over the past year.
What fun I’ve had in tv world! And a very special thank you to Hallmark Home & Family, Extra, Access Hollywood, Focus Magazine, Magnolia Bakery, Nami Scott and more for letting me be a part of your fun.
I can’t wait to see what this year brings!
If you have a show, event, product or brand collaboration you think might be a fit, shoot me an email!
Let’s make some magic happen…

***
Dawn McCoy is quite literally the hostess with the mostest…or in this case, the host with the most. As the founder & editor of BeautyFrosting.com, in 2012, “the sweet life” she loves to live – and her love of beauty, baking and being – became public domain. With her blog and social media’s growing popularity, she was asked to appear as a beauty and lifestyle expert on shows such as Hallmark Home & Family, Extra, Access Hollywood and more, and host events for countless brands and networks. She wants you to enjoy the sweetest life you can imagine and she’s here to show you just that. Hosting & Acting Inquiries & bookings: Gloria Hinojosa at Amsel Eisenstadt Frazier & Hinojosa – (323) 939-1188 *Voiceover Bookings: Peter Varano at AVO Talent (310) 360-7680 *Event Bookings: BFAsst@BeautyFrosting.com

When I host an event, everything matches.

Even my mani by Zenii LA .

I call this one “Burlesque Bling” – a perfect fit for the upcoming Gabriel Cosmetics Burlesque launch party I’m hosting at the SLS Beverly Hills this Thursday.

I modeled it after the invitation. Yep. Matchy-matchy.

BF Asks: Are you matchy-matchy?

To me, Summer 2013 will always be about rooftop Wednesdays at Sunset at The London West Hollywood.

On the rooftop of The London West Hollywood reflecting on all of the friends, fun and fine tunes Summer 2013 has brought into my world

I imagine I will forever think of that rooftop – set to the sounds of Daft Punk’s “Get Lucky” and Robin Thicke’s “Blurred Lines” – as the frozen video of Summer 2013. And what a magical memory to have!

I have spent a few “Wednesdays at Sunset” at The London West Hollywood and each one has been better than the last. But I have to say the best one I’ve had yet was when I hosted a Rooftop Cabana Cocktail Party for my favorite blogger-friends a few weeks ago. Between the delightful conversation with my fellow bloggers, new friends meeting each other and delicious bites and cocktails, it was my favorite event of the year thus far! I get by with a little help from my friends...and with the help of the beautiful setting of The London West Hollywood

The delicious details at The London West Hollywood "Wednesdays at Sunset"

And with our soundtrack set to the spins of Infamous DJs, we were in summer heaven!

I want to extend a special THANK YOU to our gracious hosts, The London West Hollywood (of course!) and my fairy godmother, Gina Wade Creative. This wouldn’t have been possible without your imagination, generosity and amazing service  – not to mention – the most fab hotel, and rooftop, in town! ‘Til next time, my beloved London…

I’ll warn you now. This is a love letter of a sort to Gracie Award-winning lifestyle & romance guru, Moll Anderson.

You may have seen her on The Doctors this past Thursday discussing how to brighten your home, brighten your mood and rev up your romantic life. But my Moll mania goes back a few years.

I originally found Moll while I was living in Nashville for 4 years. I was working at Woo Skincare & Cosmetics and every month would look forward to lobster mac & cheese for lunch while I would pore over Moll’s fabulous column in Nashville Lifestyles. Besides gaining a little weight with that indulgent lunch, I also gained some lifelong tips that I’ve never forgotten!

As you all may have gathered by now, I love hosting parties! So when I recently found this beautiful new book, through a fellow Moll fan & friend in Nashville, it quickly became my entertaining bible.

Why have I become such a Moll devotee? Moll delights in the decadent details and encourages her readers to work with what they’ve got – regardless of budget or time – to create magical moments. She even makes a coffee table an exotic escape! Whether you’re financially strapped or free to spend, Moll offers some clever suggestions about how to make the most of where you live and what you have, right now.

Whether you’re single, in a relationship, or married, you will be inspired by the tantalizing tablescapes, recipe rescues, terrific tips, and seductive suggestions.

While I’m a single gal at the moment, I have found her seductive taste, tips & tricks to be utterly lifesaving! And for those of you who are coupled out there, I love how Moll shows you how to make the most mundane Monday turn into a most romantic rendezvous. From cover to cover, this book is filled with seductive tips!

Some of her top tips?

Great for the graduate or a must-have for the soon-to-be-married, I can’t say enough good things about this go-to guide! I have gifted it thrice now and the recipients have just raved. Thanks for putting this into the world, Moll! You are my entertaining, lifestyle & romance fairy godmother!